15. Texas Longhorns- The Longhorns aren’t quite the favorites for the Big 12 title, but they are definitely setting themselves up for a run at title in the near future. After a rough couple of years, really since Colt McCoy graduated, Texas appears poised to put themselves back in National landscape in 2012. The defense should impress, as seven starters return. This unit will be led Senior Defensive End Alex Okafor and Junior  Cornerback Carrington Byndom, who were two rare bright spots on the Longhorns in 2011. The offense has to make great strides in 2012 if the Longhorns are to compete for the Big 12 title. While Ash didn’t blow anyone away in the regular season last year with just four touchdowns to eight interceptions,  Ash appears to have earned the No. 1 quarterback spot after his great performance in the Holiday Bowl last year.  Numerous Longhorns offensive coaches, believe that Ash’s made huge strides on his poise in the pocket this offseason. A more poised Ash, should help the Longhorns improve an offense that wasn’t very impressive in 2011. At the running back position, Malcom Brown appears to have emerged as the feature back for the Longhorns heading into 2012.. Annually Texas has a great recruiting class. But to be successful in 2012, the Longhorns need some of their younger players to step-up and take control of the offense if they wish to win big in 2012. Record: 9-3

14. Clemson Tigers- The defending ACC champs are in position to compete for a second straight ACC title. Quarterback Tajh Boyd (3,328yards and 33 TDs) and receiver Sammy Watkins (82 catches, 1219 yards, and 12 TDs),will form one of the top pass-catch combinations in the nation. Running back Andre Ellington (1,062 yards and 10 TDs) looks to, (and should), top 1,000 yards for a second straight season in 2012. While there’s no shortage of weapons in the back field, the Tigers might have some trouble after losing three starters on the offensive line, to graduation.  The defense allowed nearly 400 yards a game in 2011. Defensively many seniors graduated, which leaves the Tigers with a very young defense. Despite great skill position talent, the Tigers won’t successfully be able to defend their ACC  Title because of a young defense and inexperienced offensive line.  Record: 7-5

13. Michigan State Spartans- After back-to-back 11-win seasons, the Spartans look to gain that elusive 12th win and a perfect season in 2012. The Spartans should be the biggest challenger to Michigan in the Big Ten, but they will have to replace star quarterback Kirk Cousins and the team’s top three wide receivers. Andrew Maxwell (171 yards and 1 TD) will replace Cousins and will have two young Wide Receivers ,Tony Lippett (Sophomore) and Bennie Fowler (Junior), as targets. With all the questions surrounding the consistency of the passing attack, look for the offense to lean more on running back Le’Veon Bell (900 yards and 11 TDs) and a strong offensive line that returns four starters. If the Spartans are able to finally get that 12th win, it will likely be because Le’Veon Bell was able to lead the offense, with over 1,000 rushing yards.  Losing defensive tackle Jerel Worthy was a tough blow, but defensive end William Gholston is back after registering 12 tackles for a loss and four sacks in 2011. The linebacking corps could be among the best in the nation, with Denicos Allen, Max Bullough and Chris Norman all returning. Their schedule isn’t lacking any exciting games, as Michigan State hosts Boise State, Notre Dame, Ohio State and Nebraska in East Lansing, while playing Michigan and Wisconsin on the road. Record 11-1

12. Wisconsin Badgers- There’s a lot of new faces stepping into key positions, not only on the field, but also on the coaching staff for the Badgers in 2012.  The biggest loss is quarterback Russell Wilson, who turned in a terrific senior year and led the Badgers to another Rose Bowl appearance after transferring from NC State. With Wilson departing,the offense will lean on running backs Montee Ball (1759 yards and 32 TDs) and James White (683 yards and 6 TDs). Ball is certainly a Heisman candidate after finishing in the top  five in voting in 2011. However, the offensive line will be replacing three starters. Wilson’s replacement, Joe Brennan, was impressive in preseason camp, but needs to prove himself in a game situation. The defense ranked 15th nationally in yards allowed and mostof the core will return in 2012. Senior Mike Taylor and Junior Chris Borland will form one of the most exciting linebacking duos in the nation as the Badgers look to win the Big Ten. Record 10-2 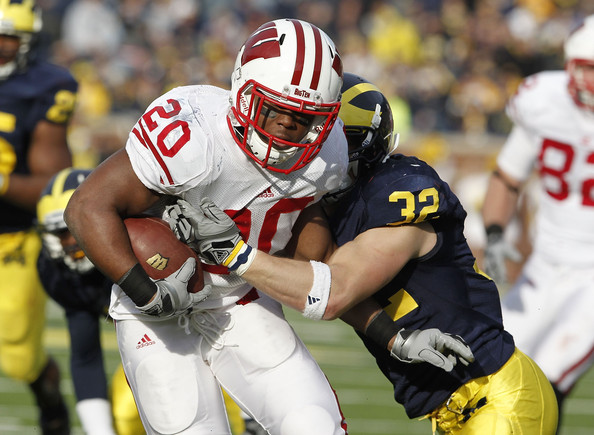 11. West Virginia Mountaineers- A conference change in 2012 didn’t change the fact that this team will be a factor on the national scene this year. Quarterback Geno Smith (3798 yards and 25 TDs) will lead one of the top passing attacks incollege football, especially with receivers Tavon Austin (1186 yards and 8 TDs), Stedman Bailey (1279 yards and 12 TDs) and Ivan McCartney (585 yards and 3 TDs) returning in 2012. While the passing game shouldn’t be an issue, the rushing attack and offensive line must show improvement. Losing defensive coordinator Jeff Casteel to Arizona was a tough blow for West Virginia’s defense.The bigger question on this defense is whether the Mountaineers can replace Julian Miller and Bruce Irvin, linebacker Najee Goode and cornerback Keith Tandy. Record: 10-2 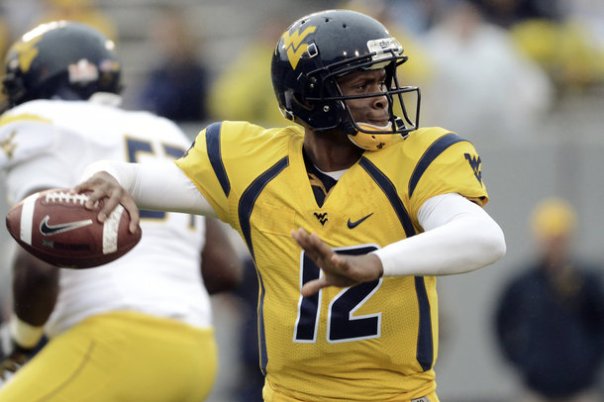